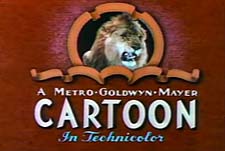 As is obvious from the hyphenated name, Metro-Golwdyn-Mayer was formed from many components. Richard A. Rowland founded the original Metro Pictures Corporation in 1915, and their biggest star was Francis X. Bushman. The studio was based in New York City, Fort Lee, New Jersey, and in Los Angeles. Marcus Loew of Loews Theaters purchase purchased the studio in 1920. Loew next bought up Goldwyn Pictures, which was founded in 1916 by Samuel Goldfish and Broadway producers Edgar and Archibald Selwyn. Samuel added the "wyn' to his name, but lost the studio to Lee Shubert.
Read More
Loew bought the studio in 1924, and hired Louis B. Mayer to head production at the combined production facilities. Mayer added his name to the studio title in 1925, with Loews blessing. Marcus Loew died in 1927, and the studio far outgrew his ambitions for just a studio to provide content for his theater chain. The studio was single-handed credited for inventing the Hollywood star system; their stable of stars went on to dominate the box office in the 1930s and 1940s.

Animation came to MGM in 1930 when the studio was called on to distribute a series of cartoons from longtime Disney collaborator Ub Iwerks Studio that starred a character named Flip the Frog. The first Flip cartoon- Fiddlesticks- was notable for being the first sound cartoon to be produced in two-color Technicolor. The series ran to nearly forty entries before running out of steam in 1933, and was succeeded by Willie Whopper.

Iwerks distribution deal lapsed in 1934, and MGM wanted to keep an animation component at the studio. First they contracted with producers/directors Hugh Harman and Rudolph Ising to produce a new series of color cartoons. Harman and Ising brought their popular Looney Tunes character Bosko with them to MGM when they left Warner Bros. Their first series was Happy Harmonies and in many ways resembled the Looney Tunes' sister series, Merrie Melodies. The Happy Harmonies regularly ran over budget, and MGM dismissed Harman-Ising in 1937 to start its own animation studio.

The MGM Studios first self-produced series was Captain and the Kids, based on the characters created by Rudolph Dirks. The series did not prove to be too popular with movie-goers. Reversing direction, the studio re-hired Harman and Ising in 1939. Ising created the studio's first successful animated character, Barney Bear. However, MGM's biggest cartoon stars would come in the form of the cat-and-mouse duo Tom and Jerry, created by William Hanna and Joseph Barbera in 1940. The Tom and Jerry cartoons won seven Academy Awards between 1943 and 1953. In 1941, Tex Avery, another Schlesinger/Warner Bros. alumnus, joined the animation department. It was Avery who gave the unit its image and style, with successes like Red Hot Riding Hood, Swing Shift Cinderella, and the Droopy series.

Avery left the studio in 1953, leaving Hanna and Barbera to focus on the popular Tom and Jerry and Droopy series. After 1955, all cartoons were filmed in wide screen CinemaScope until MGM closed its cartoon division in 1957. Hanna and Barbera started their own studio, and became synonymous with television cartoons.

1.9/5 Stars from 11 users.
Add Your Vote Now!
Please give the Cartoon Series MGM a vote between 1 and five stars, with five stars being the best, 1 being a show you absolutely hate, and a three for an average show.
This Studio has been viewed 3 times this month, and 165,317 times total.