MGM : Shorts : Captain and the Kids 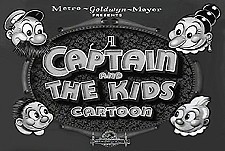 After their first, failed experiment with subcontracting their animation production out Hugh Harmon and Rudlof Ising, MGM brought production in house. The set producer Fred Quimby the task of building the animation department. He brought in Isadore "Friz" Freleng from Warner Bros. among others to help direct this series based on a comic strip by Rudolph Dirks. William Hanna also got his start on this series. But the series was not popular, and MGM brought back Harmon and Ising to infuse new blood into the department.

"Captain and the Kids" has not yet received enough votes to be rated. 2.2552
Add Your Vote Now!
Please give the Theatrical Series Captain and the Kids a vote between 1 and five stars, with five stars being the best, 1 being a show you absolutely hate, and a three for an average show.
This Series has been viewed 4 times this month, and 14,903 times total.