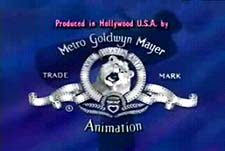 MGM Animation was established in 1993 as successor to the original Metro-Goldwyn-Mayer cartoon studio from the 1940's and 50's and the later MGM Animation/Visual Arts from the 1960s. This division was responsible for producing children's entertainment based upon properties owned by MGM. The late 1990's saw a big rise in profits for studios with low-budget direct to video sequels. Modern MGM Studios financed the production of a few sequels of some of their bigger animation hits to direct-to-video release for the tv-tender generation.

"Metro-Goldwyn-Mayer Animation" has not yet received enough votes to be rated. 2.2552
Add Your Vote Now!
Please give the Cartoon Series Metro-Goldwyn-Mayer Animation a vote between 1 and five stars, with five stars being the best, 1 being a show you absolutely hate, and a three for an average show.
This Studio has been viewed 8 times this month, and 38,923 times total.

Horton Hears a Who
More DVD's