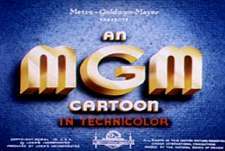 Animated shorts came to MGM late compared to other major studios. It was already 1930 when the studio was called on to distribute a series of cartoons from longtime Disney collaborator Ub Iwerks Studio that starred a character named Flip the Frog. The first Flip cartoon- Fiddlesticks- was notable for being the first sound cartoon to be produced in two-color Technicolor. The series ran to nearly forty entries before running out of steam in 1933, and was succeeded by Willie Whopper.
Read More
Iwerks distribution deal lapsed in 1934, and MGM wanted to keep an animation component at the studio. First they contracted with producers/directors Hugh Harman and Rudolph Ising to produce a new series of color cartoons. Harman and Ising brought their popular Looney Tunes character Bosko with them to MGM when they left Warner Bros. Their first series was Happy Harmonies and in many ways resembled the Looney Tunes' sister series, Merrie Melodies. The Happy Harmonies regularly ran over budget, and MGM dismissed Harman-Ising in 1937 to start its own animation studio.

The MGM Studios first self-produced series was Captain and the Kids, based on the characters created by Rudolph Dirks. The series did not prove to be too popular with movie-goers. Reversing direction, the studio re-hired Harman and Ising in 1939. Ising created the studio's first successful animated character, Barney Bear. However, MGM's biggest cartoon stars would come in the form of the cat-and-mouse duo Tom and Jerry, created by William Hanna and Joseph Barbera in 1940. The Tom and Jerry cartoons won seven Academy Awards between 1943 and 1953. In 1941, Tex Avery, another Schlesinger/Warner Bros. alumnus, joined the animation department. It was Avery who gave the unit its image and style, with successes like Red Hot Riding Hood, Swing Shift Cinderella, and the Droopy series.

Avery left the studio in 1953, leaving Hanna and Barbera to focus on the popular Tom and Jerry and Droopy series. After 1955, all cartoons were filmed in wide screen CinemaScope until MGM closed its cartoon division in 1957. Hanna and Barbera started their own studio, and became synonymous with television cartoons.