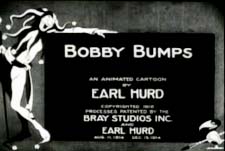 A silent animated series based on R. F. Outcault's Buster Brown and created and animated by Earl Hurd. This was a landmark series in that Hurd developed the cel animation process on this series. Previous to this series, all animated cartoons were produced on paper. To create the next image in a sequence, a new drawing had to be made- background and foreground objects combined. With cel animation, Bray drew his characters on clear sheets of plastic or celluloid, which could be place placed over still backgrounds during photography.

"Bobby Bumps" has not yet received enough votes to be rated. 2.2552
Add Your Vote Now!
Please give the Theatrical Series Bobby Bumps a vote between 1 and five stars, with five stars being the best, 1 being a show you absolutely hate, and a three for an average show.
This Series has been viewed 2 times this month, and 3,973 times total.