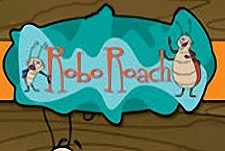 This Canadian animated television series recounts the story of a cockroach named Rube and his brother Reg. After wandering too close to that donut crumb, Rube finds himself trapped in a lab with hardware wired to those hard-to-reach places. Luckily, Rube's older brother Reg was more street-smart than his sibling, and risked all to save his brother from the lab. But neither could foresee the combination of computer chips, electrical socket and resulting meltdown that would leave Rube with bizarre Robomorphing powers. Rube is RoboRoach. And Reg has never been so bugged.

"RoboRoach" has not yet received enough votes to be rated. 2.2552
Add Your Vote Now!
Please give the Cartoon Series RoboRoach a vote between 1 and five stars, with five stars being the best, 1 being a show you absolutely hate, and a three for an average show.
This Series has been viewed 3 times this month, and 2,416 times total.