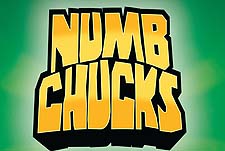 Woodchuck brothers Dilweed and Fungus didn’t always see themselves as mystical Kung Fu saviors until they stumbled upon an infomercial featuring mega legend Woodchuck Morris’ mullet-fueled motivational kung-fu video “The Way of the Chuck!” Produced by Jam Filled Entertainment and 9 Story Entertainment, in association with YTV, this Canadian animated television series premiered on YTV in January 2014. The series moved into the US on Cartoon Network later in 2014.

3.6/5 Stars from 4 users.
Add Your Vote Now!
Please give the Cartoon Series Numb Chucks a vote between 1 and five stars, with five stars being the best, 1 being a show you absolutely hate, and a three for an average show.
This Series has been viewed 2 times this month, and 12,254 times total.