Other Studios : D : DiC Entertainment : Heathcliff and The Catillac Cats 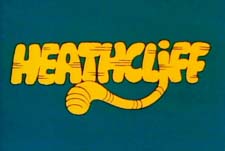 While dogs always seem to get top billing at the movies, cats have consistently stolen the show on the small screen. Among the greats—Felix, Tom, Sylvester...—one name stands out as slightly cooler, more rebellious, maybe even sexier than his feline contemporaries. Heathcliff may have been a housecat, but with his scruffy pedigree, penchant for trouble and irreverent attitude, he was destined for cartoon fame.

Originally a comic strip created by George Gately in 1973, Heathcliff’s TV debut came in the form of the 1980 weekly Heathcliff and Dingbat. Here, television audiences were introduced to the pugnacious kitty, his well-meaning owners the Nutmegs, girlfriend Sonja, and father Pops (always in convict stripes, undoubtedly suggesting the origin of Heathcliff’s predisposition to fish theft and other petty crime). Everyone worked together in a determined battle against numerous neighborhood adversaries (Spike the bulldog, milkmen, dogcatchers, etc.) Joining Heathcliff in the half hour show were a quirky band of monster pals—Dingbat the vampire dog, Sparerib the skeleton, and Nobody the bodiless pumpkin—who starred in a series of four- and six-minute vignettes.

Heathcliff and the Catillac Cats featured a street-tough gang of junkyard cats led by the suave and cunning Riff Raff. Among the others were shapely, vainglorious Cleo, brainiac Wordsworth, dumb-lug Mungo, wimpy Hector and mongrel villain Leroy. The show usually consisted of two fifteen-minute segments—the first featuring Heathcliff in all his debaucherous glory, the second chronicling the junkyard gang’s bumbling pursuit of one of Riff Raff's zany schemes (inevitably revolving around food or money).

While Heathcliff’s boisterous character waxed and waned with the times, he never lost the irresistible charm brought spectacularly to life via cartoon-voice legend Mel Blanc. Certainly there will always be others clawing to take his place, but Heathcliff stands alone as one unapologetically cool cat, comedian and rebel without a cause.

5/5 Stars from 3 users.
Add Your Vote Now!
Please give the Cartoon Series Heathcliff and The Catillac Cats a vote between 1 and five stars, with five stars being the best, 1 being a show you absolutely hate, and a three for an average show.
This Series has been viewed 5 times this month, and 9,433 times total.