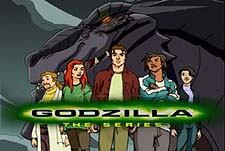 Picking up where movie left off, this is an adventure that pits humanity against a new generation of giants. Born of radiation, Godzilla wreaks havoc on the city while attempting to find a nest. Nick and Phillipe teamed up and take him down, but it appears that monster has left behind an heir to the throne. Nick found a creature and formed a bond with him as a bizarre pseudo-parent figure.

"Godzilla: The Series" has not yet received enough votes to be rated. 2.2552
Add Your Vote Now!
Please give the Cartoon Series Godzilla: The Series a vote between 1 and five stars, with five stars being the best, 1 being a show you absolutely hate, and a three for an average show.
This Series has been viewed 2 times this month, and 1,915 times total.