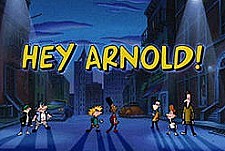 Arnold was just like any other kid growing up in the city, assuming those kids also had a room operated by a remote-control and a pet pig. Along with Gerald, Phoebe, Brainy, and resident jinx Eugene, this amusing group of fourth-graders had what it took to survive life in the big city. They even managed to survive the rigors of a regular television series, as Hey Arnold! became yet another successful "Nicktoon."

4.7/5 Stars from 4 users.
Add Your Vote Now!
Please give the Cartoon Series Hey Arnold! a vote between 1 and five stars, with five stars being the best, 1 being a show you absolutely hate, and a three for an average show.
This Series has been viewed 3 times this month, and 6,883 times total.