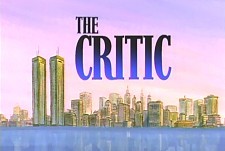 Created by writing partners Al Jean and Mike Reiss from The Simpsons, the show featured Jon Lovitz as New York film critic Jay Sherman. Poor rakings had ABC cancel the show, and Fox picked up the series for a second season. Despite a ratings improving, Fox cancelled the show after ten episodes. From 2000 to 2001, ten web episodes were animated using Adobe Shockwave with significantly reduced cast and production values. These were broadcast on AtomFilms.com and Shockwave.com.

"The Critic" has not yet received enough votes to be rated. 2.2552
Add Your Vote Now!
Please give the Cartoon Series The Critic a vote between 1 and five stars, with five stars being the best, 1 being a show you absolutely hate, and a three for an average show.
This Series has been viewed 3 times this month, and 2,353 times total.