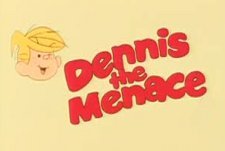 In 1951, cartoonist Hank Ketcham created a comic strip character based on his son. This character was, to put it bluntly, a holy terror. If Mr. Ketcham’s boy was offended by this characterization, it probably didn’t last long, as Dennis the Menace became one of the most successful comic strips in publishing history.

Eight years later, Dennis conquered the medium of television, with a show that premiered in prime time and ran for four years. An animated version would not appear until 1985.
Read More
Dennis the Menace was a cowlicked, scheming young man, full of mischievous energy. While most folks chalked up Dennis’ activities to youthful excitement, his next-door neighbor, Mr. Wilson, found the boy insufferable. With the help of his friend Joey and his dog Ruff, Dennis would get into the wildest situations imaginable. Many times Margaret, with whom Dennis had a love-hate relationship, would involve herself just to show that girls could be as much trouble as boys.

As much fun as the boy had wreaking havoc, the producers always made sure to show the consequences of Dennis' actions by the end of the episode, even inserting a moment when Dennis spoke to the kids at home.

Dennis the Menace was wildly popular in animated form as well, so much so that after three years in syndication, CBS decided to air the program on their network.

Part of the reason for the show's success must be attributed to the impressive vocal cast, which included the late Phil Hartman in a brilliant performance as Mr. Wilson.

"Dennis the Menace" has not yet received enough votes to be rated. 2.2552
Add Your Vote Now!
Please give the Cartoon Series Dennis the Menace a vote between 1 and five stars, with five stars being the best, 1 being a show you absolutely hate, and a three for an average show.
This Series has been viewed 3 times this month, and 6,548 times total.