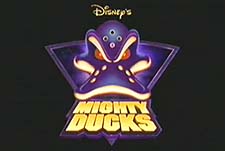 Very loosely based on the live-action film series of the same name, The Mighty Ducks took the hockey team to another galaxy exists a planet populated entirely by humanoid ducks. The series aired on ABC and The Disney Afternoon in the fall of 1996. The first three episodes of the animated series were edited into a direct-to-video feature film, Mighty Ducks the Movie: The First Face-Off in 1997.

3.3/5 Stars from 4 users.
Add Your Vote Now!
Please give the Cartoon Series The Mighty Ducks: The Animated Series a vote between 1 and five stars, with five stars being the best, 1 being a show you absolutely hate, and a three for an average show.
This Series has been viewed 3 times this month, and 30,632 times total.

Challenge of the Super Friends