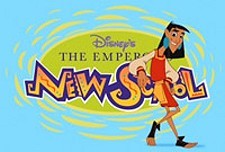 Animated fun following the life of Kuzco, a would-be emperor who must graduate from school before he can claim the throne and become the official emperor. He must also thwart Yzma and Kronk's constant attempts to make him fail. If Yzma the witch can stop him passing his exams, she will rule in his place.

"The Emperor's New School" has not yet received enough votes to be rated. 2.2552
Add Your Vote Now!
Please give the Cartoon Series The Emperor's New School a vote between 1 and five stars, with five stars being the best, 1 being a show you absolutely hate, and a three for an average show.
This Series has been viewed 3 times this month, and 7,804 times total.