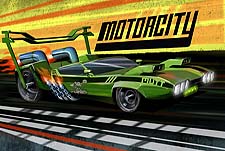 Set in a futuristic Detroit after it has been purchased and built into Detroit Deluxe by evil billionaire Abraham Kane. Kane, having banned personal freedoms including automobile transportation, is ultimately challenged by a group of rebels, The Burners, led by 17-year-old Mike Chilton. The Burners retreat to an underground city, customize their fleet of hot rods and pursue their quest to stop Kane from taking over the world.

"Motorcity" has not yet received enough votes to be rated. 2.2552
Add Your Vote Now!
Please give the Cartoon Series Motorcity a vote between 1 and five stars, with five stars being the best, 1 being a show you absolutely hate, and a three for an average show.
This Series has been viewed 2 times this month, and 1,651 times total.