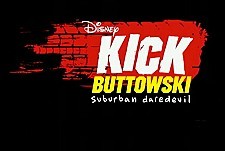 Clarence "Kick" Buttowski is an extraordinary kid living in the world's most ordinary town. Determined to become the world's greatest daredevil, Kick rebels against the mundane and knows that when life throws him an obstacle, his only choice is to jump it. Small in stature but big in heart, Kick makes the most out of his suburban surroundings by devising such stunts as riding down Dead Man's Drop on an ironing board or racing the school bus with a soda-powered jet pack.

These are awards this series has won:

3.9/5 Stars from 5 users.
Add Your Vote Now!
Please give the Cartoon Series Kick Buttowski - Suburban Daredevil a vote between 1 and five stars, with five stars being the best, 1 being a show you absolutely hate, and a three for an average show.
This Series has been viewed 3 times this month, and 6,533 times total.