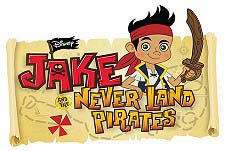 An interactive treasure hunt that follows the adventures of classic characters Peter Pan Captain Hook and Smee, along with a new crew of kid pirates led by the enthusiastic and courageous Jake. The series, which emphasizes teamwork, stars David Arquette as the voice of the lookout parrot, Skully, and features original pirate rock music performed by The Never Land Pirate Band.

"Jake And The Never Land Pirates" has not yet received enough votes to be rated. 2.2552
Add Your Vote Now!
Please give the Cartoon Series Jake And The Never Land Pirates a vote between 1 and five stars, with five stars being the best, 1 being a show you absolutely hate, and a three for an average show.
This Series has been viewed 2 times this month, and 11,610 times total.