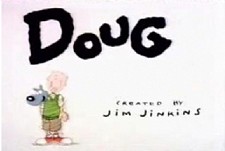 The adventures of a daydreamer and his dog. Disney bought this Nickelodeon show and made it Disney. Once under the Disney banner for a Saturday morning run, the new series sent Doug and friends (and enemies) to Bluffington’s new junior high school, which was named after and shaped like rich girl Beebe Bluff. Doug brought along his familiar green sweater vest, brown shorts, and vivid imagination.

4.8/5 Stars from 3 users.
Add Your Vote Now!
Please give the Cartoon Series Brand Spanking New! Doug a vote between 1 and five stars, with five stars being the best, 1 being a show you absolutely hate, and a three for an average show.
This Series has been viewed 3 times this month, and 6,991 times total.