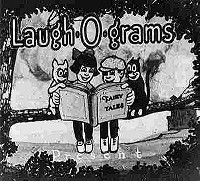 Walt Disney's earliest cartoon series, the Laugh-O-gram series began in Kansas City, Missouri. Pulling together fiends (many of whom went on to illustrious careers in animation), Disney produced six cartoons for Pictorial Clubs, Inc. before they folded. Disney went on to produce one final cartoon for Thomas McCrum, a Kansas City dentist. The studio declared bankruptcy in July 1923 and Disney left for Hollywood.

4.2/5 Stars from 2 users.
Add Your Vote Now!
Please give the Theatrical Series Laugh-O-gram a vote between 1 and five stars, with five stars being the best, 1 being a show you absolutely hate, and a three for an average show.
This Series has been viewed 5 times this month, and 18,769 times total.

Laugh-O-gram Films
Kansas City There have not yet been any votes for "Kansas City". Vote Now! 23