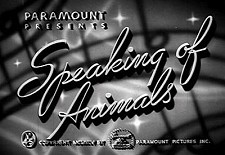 Created by celebrated cartoon animator Tex Avery and independent Hollywood film producer Jerry Fairbanks, this series was distributed theatrically by Paramount Pictures from 1941 through 1949. To combine live-action animals with their animated mouths, Fairbanks used a modified rear-screen projection process along with a rotoscope system. "Rotoscoping is a method by which the mouths of the animals were replaced by semi-animated human mouths," he recalled. "We would film live actors such as Mel Blanc and Sterling Holloway in black face with their lips painted white. That way, we could have just their lip movements visible on film. The images were then traced frame by frame, reshot as animation that in turn was matted into the actual animal footage.

"Speaking Of Animals" has not yet received enough votes to be rated. 2.2552
Add Your Vote Now!
Please give the Theatrical Series Speaking Of Animals a vote between 1 and five stars, with five stars being the best, 1 being a show you absolutely hate, and a three for an average show.
This Series has been viewed 4 times this month, and 10,460 times total.