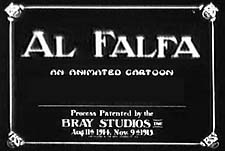 Based on a modified version of his main character from his independently produced Phoney Farm, Paul Terry created Farmer Al Falfa for Bray. But not by choice. Terry was working as an independent animation producer. Then Bray discovered Terry was using a version of the cel animation process- a technique Bray and Earl Hurd has under patent- they made him an offer he could not refuse. Thus Bray brought Terry into his studio to produce the Farmer Al Falfa series.
Read More
Terry only produced 16 shorts and then moved over to Edison (for one short) before being interrupted by World War I.

After the war, Terry brought the farmer back for Paramount Magazine. But the dream of being an independent producer was strong, and in 1920, Terry and actor-turned-writer Howard Estabrook formed Fables Studios and producing over three hundred Aesop's Film Fables cartoons, some of which also featured the farmer.

By 1929, Fables Studios broke up, and TerryToons was formed. The farmer had his last stand here, with one last series bearing his name.

"Farmer Al Falfa" has not yet received enough votes to be rated. 2.2552
Add Your Vote Now!
Please give the Theatrical Series Farmer Al Falfa a vote between 1 and five stars, with five stars being the best, 1 being a show you absolutely hate, and a three for an average show.
This Series has been viewed 3 times this month, and 5,469 times total.