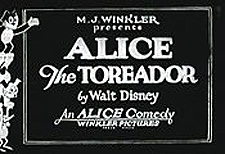 First developed as a prototype in Kansas City with Alice's Wonderland, Disney took the concept of a live-action girl in a cartoon world with him to Hollywood after Laugh-O-gram Films went bankrupt. The short eventually gained the interest of Winkler Pictures as a distributor, run by Margaret Winkler and her fianceé, Charles Mintz.
Read More
Based on the deal with Winkler Pictures, Walt Disney brought the original Alice- Virginia Davis- to California from Missouri to star in the series. Over time, three other girls would take on the role of Alice: Margie Gay, Dawn O'Day and Lois Hardwick.

Because he was working on a shoe-string budget, Disney was not able to get his crew from Kansas City out to Los Angeles. Thus, Disney wrote, directed and animated the early films in this series, shooting the films in a wooden one car garage behind his Uncle Robert's home in Hollywood.

As the film salesman for the Winkler Company, Margaret Winkler's husband complained bitterly that the Alice Comedies were too rough and poorly produced. Margaret stuck by Walt, stepping in to edit the shorts and tutoring Disney. Margaret was know to send detailed letters to Disney, outlining what had to be improved to meet her expectations for the series. Disney upgraded his studio, and succeeded in bringing most of his Kansas City staff out to Los Angeles. With Ub Iwerks, Friz Freleng, Hugh Harman, Rudy Ising, and Ham Hamilton on hand to help out, the films improved in quality. Eventually, Winkler dictated the live-action wrap-arounds be dropped, resulting in fully animated shorts.

"Alice Comedies" has not yet received enough votes to be rated. 2.2552
Add Your Vote Now!
Please give the Theatrical Series Alice Comedies a vote between 1 and five stars, with five stars being the best, 1 being a show you absolutely hate, and a three for an average show.
This Series has been viewed 6 times this month, and 20,215 times total.