Other Studios : W : Jay Ward Productions : George of the Jungle 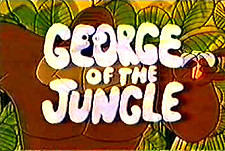 George was a dimwitted, clumsier version of Tarzan, who, despite the warning in the catchy opening theme to "watch out for that tree," would inevitably eat bark as he splatted into trunk after trunk. Sharing the half-hour was Super Chicken, a.k.a. Henry Cabot Henhouse III, an ordinary, run-of-the-coup millionaire fowl who became his alter-ego after downing some Super Sauce. With the help of his reluctant and cowardly lion pal, Fred, Super Chicken would fly around in his Supercoupe tracking down criminals. Rounding out the program was a third segment, Tom Slick. With his never-fail optimism, Tom would calmly tell his girlfriend, "There’s no such word as failure in auto racing, Marigold."


Jay Ward Prods
This page has been viewed 3 times this month, and 7,111 times total.

George of the Jungle Show Segments:

George of the Jungle More DVD's