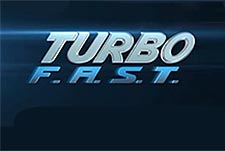 Based on the lackluster feature film Turbo, this series the first in DreamWorks’ massive content deal of over 300 hour of content for Netflix; this series will be streamed exclusively online.

"Turbo: F.A.S.T." has not yet received enough votes to be rated. 2.2552
Add Your Vote Now!
Please give the Cartoon Series Turbo: F.A.S.T. a vote between 1 and five stars, with five stars being the best, 1 being a show you absolutely hate, and a three for an average show.
This Series has been viewed 2 times this month, and 4,830 times total.