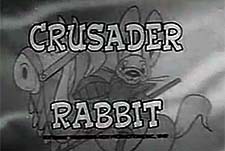 A milestone in TV history, Crusader Rabbit was the first made-for-television animated series. Conceived by animator Alex Anderson and financier Jay Ward, the series was sold to NBC in 1948. The network decided not telecast Crusader Rabbit on their network, allowing the producers to sell the series in national syndication, with many NBC affiliates (including New York and Los Angeles) picking it up for local showings.

Skeptics thought a weekly animated series would be too costly to turn a profit, but Ward came up with a way to buck the system: limited animation. Most classically animated theatrical cartoons had 40 cels (individual drawings) per foot of film, but Ward's new style would utilize only 4 cels per foot. As a result, the 19.5-minute shows came in at approximately $2,500 per episode.

0/5 Stars from 39 users.
Add Your Vote Now!
Please give the Cartoon Series Crusader Rabbit a vote between 1 and five stars, with five stars being the best, 1 being a show you absolutely hate, and a three for an average show.
This Series has been viewed 3 times this month, and 6,252 times total.