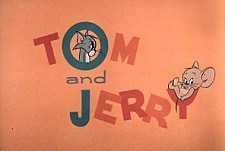 After the last of the Deitch cartoons were released, MGM turned to American director Chuck Jones and partner partner Les Goldman. Jones and Goldman went on to produce 34 shorts, and while all are distinctively Chuck, Jones never seemed to 'get' the Tom & Jerry shtick.

Jones had trouble adapting his style to Tom and Jerry's brand of humor, and a number of the cartoons favored poses, personality, and style over storyline. The characters underwent a slight change of appearance: Tom was given thicker, Boris Karloff-like eyebrows, a less complex look, and furrier cheeks, while Jerry was given larger eyes and ears, and a sweeter, Porky Pig-like expression.

MGM ceased production of animated shorts in 1967, by which time Sib Tower 12 had become MGM Animation/Visual Arts, and Jones had already begun to move on to television specials and the feature film The Phantom Tollbooth.

3.5/5 Stars from 2 users.
Add Your Vote Now!
Please give the Cartoon Series Tom and Jerry a vote between 1 and five stars, with five stars being the best, 1 being a show you absolutely hate, and a three for an average show.
This Series has been viewed 5 times this month, and 33,409 times total.