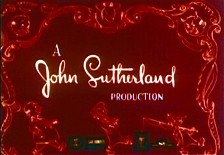 Coming from a background producing Disney animated films, John Sutherland first partnered with fellow ex-Disney lyricist Larry Morey to produce a series of puppet films for United Artists. When the Daffy Dittys series failed to gain traction, Morey returned to Disney, and Sutherland began focusing on "industrial" films, films financed by large corporate entities to enhance their public image and change public opinion.
Read More
One of Sutherland's more important relationships began in the late 1940s, when Alfred P. Sloan- then the head of General Motors- bankrolled a grant through his Sloan Foundation to Harding College. With The Sloan Foundation money, Harding College pushed the production of a series of short films that extolled the virtues of the American way of life. These propaganda films for big business lauded the salutary effects of capitalism and buisiness as the economic drivers of a Utopian future.

John Sutherland Productions was known for the high quality of the animation in their films. The production values rivaled that of his previous employer, Walt Disney. Sutherland had left Disney on good terms, and Walt Disney (as well as Darryl Zanuck) was known to refer clients to Sutherland's studio over the years. Sutherland hired quality artists, and paid his employees well, as the money he made in industrial films was higher than in the entertainment field. Some of the better know people who worked for him over the years included Maurice Noble, Eyvind Earle, William Hanna, Joseph Barbera, Carl Urbano, Emery Hawkins, Abe Levitow, Bob Bemiller, Bill Nolan, Darrell Calker, Eugene Poddany, Paul J. Smith, Bill Melendez, Phil Roman, Art Scott, and Warner Bros. director Frank Tashlin.

Sutherland's biggest claim to fame at Disney was voicing the adult Bambi for the film. Disney archivist and historian Dave Smith found no positive proof that Sutherland in fact voiced the character. This finding does not exclude the claim either; Disney practices at the time was to credit few if any voice actors. Smith conclusively stated, "I don’t find any names or recording dates for an adult Bambi." He did find other dates for Sutherland voicing characters, pointing out that Sutherland definitely performed voice test for Owl on April 3, 1939, for Mr. Hare on May 4, 1939, and for Mouse on February 2, 1940. In an interesting twist of fate, Sutherland married Paula Winslowe- the voice of Bambi’s mother- on September 16, 1939.

Castle in the Sky