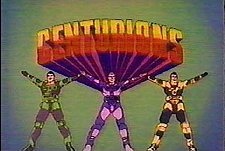 Crystal Kane and her team of Centurions try saving the world from destruction at the hands of Doctor Terror. The Centurions each have unique exoframe armor and weapons. The air combat expert, Ace McCloud, has flying exoframes: Sky Night, Skybolt and Orbital Interceptor; Jake Rockwell, the surface combat expert, had the Wild Weasel, Hornet, Detonator and Fire Force; The aquatic expert, Max Ray had the Tidal Blast, Crusier and Depth Charge. They fight Dr. Terror and Hacker- cyborgs bent on taking over the world. The Centurions' headquarters, SkyVault, is a ship orbiting the earth, from which they transport to the surface when needed. When the Centurions shout "PowerXTreme!" their Assault Weapon System is charged to their ExoFrames. Crystal Kane also beams it down from SkyVault.

"The Centurions" has not yet received enough votes to be rated. 2.2552
Add Your Vote Now!
Please give the Cartoon Series The Centurions a vote between 1 and five stars, with five stars being the best, 1 being a show you absolutely hate, and a three for an average show.
This Series has been viewed 3 times this month, and 5,711 times total.

Dastardly & Muttley in Their Flying Machines