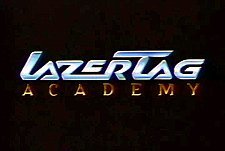 Jamie Jaren travels back in time to help her ancestors, Tom, Beth and Nicky. The kids needed protection from another futuristic being, a villainous relative of Jamie's named Draxon Drear, who led a group of genetically engineered werewolf-like beings known as the Skuggs. Drear and the Skuggs' spaceship had crashed into the Atlantic Ocean at some point in the past, but they were unwittingly awakened from suspended animation by Professor Olanga.

"Lazer Tag Academy" has not yet received enough votes to be rated. 2.2552
Add Your Vote Now!
Please give the Cartoon Series Lazer Tag Academy a vote between 1 and five stars, with five stars being the best, 1 being a show you absolutely hate, and a three for an average show.
This Series has been viewed 2 times this month, and 1,723 times total.