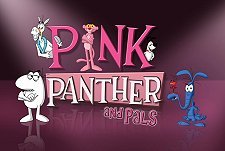 Stars of the cartoon The Pink Panther return to the animated screen as younger versions of themselves, carrying on the mayhem that endeared the original series to fans years ago. Each half-hour episode of the show consists of three animated shorts: two silent-style ones featuring Pink Panther and his arch-nemesis, Big Nose, and one chronicling the friendly rivalry between the Ant and the Aardvark.