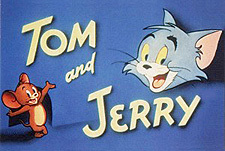 Producer William L. Snyder and director Gene Deitch made this series of Tom & Jerry overseas in Prague, Czechoslovakia at Rembrandt Films. Since the Deitch/Snyder team saw only a handful of the original Tom and Jerry shorts, the films that resulted were considered unusual and, in many ways, bizarre.

The characters' gestures were often performed at high speed, often resulting in heavy motion blur. The soundtracks featured sparse music, spacey sound effects, dialogue that was mumbled rather than spoken, and heavy uses of reverb.

These shorts are the only Tom and Jerry cartoons not to carry the "Made In Hollywood, U.S.A." phrase at the end. Due to Deitch's studio being behind the Iron Curtain, the production studio's location is omitted entirely.

2.8/5 Stars from 8 users.
Add Your Vote Now!
Please give the Cartoon Series Tom and Jerry a vote between 1 and five stars, with five stars being the best, 1 being a show you absolutely hate, and a three for an average show.
This Series has been viewed 6 times this month, and 36,839 times total.