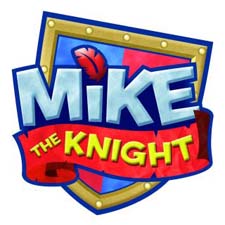 In the medieval land of Glendragon lives Mike, a boy with a big future. The son of the King and Queen, Mike is determined to grow up to be a great and noble knight, just like his dad. This brave hero is joined on his knightly missions by his companions Squirt and Sparkie—two extraordinary and eccentric dragons—and his trusty steed Galahad. Mike’s sister Evie, a trainee wizard, often tries to lend a hand, even though her spells often hinder rather than help her brother’s progress! Along the way, Mike discovers the power of responsibility and doing things the right way, abiding by his triumphant motto of “Be a knight, do it right!”

4/5 Stars from 2 users.
Add Your Vote Now!
Please give the Cartoon Series Mike The Knight a vote between 1 and five stars, with five stars being the best, 1 being a show you absolutely hate, and a three for an average show.
This Series has been viewed 3 times this month, and 1,991 times total.