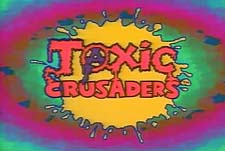 A cartoon series based on a line of action figures which were themselves based on the campy joke horror movie "The Toxic Avenger." The series depicts the movie's vengeful mutant as a deformed yet sincere cartoon superhero, a mutated former custodian (hence his primary weapon of choice was a mop). Melvin Junko was a miserable janitor at a rundown gym who often took the worst bullying from a local gang until one day, he was dunked into a highly volatile barrel of toxic waste.

"Toxic Crusaders" has not yet received enough votes to be rated. 2.2552
Add Your Vote Now!
Please give the Cartoon Series Toxic Crusaders a vote between 1 and five stars, with five stars being the best, 1 being a show you absolutely hate, and a three for an average show.
This Series has been viewed 2 times this month, and 1,468 times total.