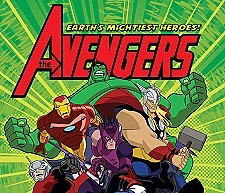 As a lead up to the actual first season, there was a micro-series of twenty 5-minute episodes. Those micro-episodes provide back story for the characters. The first season proper- 24 episodes out of a contracted 52- starred the original team from the 60s, Captain America, Iron Man, Thor, Hulk, Ant-Man and the Wasp, as they rounded up a variety of colorful villains who all escaped from prison during a major jail break.

5/5 Stars from 3 users.
Add Your Vote Now!
Please give the Cartoon Series The Avengers: Earth's Mightiest Heroes a vote between 1 and five stars, with five stars being the best, 1 being a show you absolutely hate, and a three for an average show.
This Series has been viewed 3 times this month, and 6,840 times total.