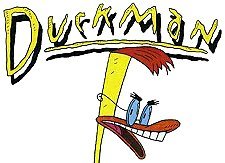 Broadcast on the USA Network in 1994. For four seasons, Duckman nested comfortably in the USA Network's "Up All Night" programming block, its politically incorrect misanthropy given full voice by Jason Alexander as a character whose cluelessness, insensitivity, deviancy, and boorishness are his best qualities. Who is Duckman? No one special, he laments, "I'm just one more duck detective who works with a pig and lives with the twin sister of his dead wife, three sons on two bodies and a comatose mother-in-law who's got so much gas she's a fire hazard."

"Duckman" has not yet received enough votes to be rated. 2.2552
Add Your Vote Now!
Please give the Cartoon Series Duckman a vote between 1 and five stars, with five stars being the best, 1 being a show you absolutely hate, and a three for an average show.
This Series has been viewed 2 times this month, and 3,265 times total.