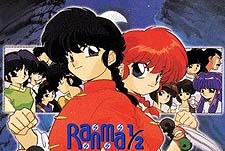 Originally serialized in Shogakukan's Weekly Shōnen Sunday from September 1987 to March 1996, the story revolves around a 16-year old boy named Ranma Saotome who was trained from early childhood in martial arts. Ranma Saotome- a 16-year-old martial artist- and his father traveled to China. There they are cursed by Jusenkyo; from now on his father turns into a Giant Panda when splashed with cold water, while Ranma becomes a female version of himself. With many fiancees and rivals, Ranma must become the best in anything-goes martial arts.

"Ranma Nibun-no-Ichi" has not yet received enough votes to be rated. 2.2552
Add Your Vote Now!
Please give the Anime Series Ranma Nibun-no-Ichi a vote between 1 and five stars, with five stars being the best, 1 being a show you absolutely hate, and a three for an average show.
This Series has been viewed 2 times this month, and 685 times total.