Other Studios : I : Inkwell Studios : Out of the Inkwell

Out of the Inkwell Theatrical Series -Inkwell Studios 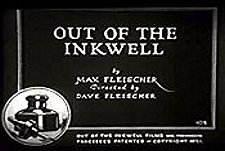 A series combining live action and animation created by Max Fleischer, this was one of the most popular short subjects of the 1920s. The films started with the artist, Max Fleischer drawing "The Clown," who would eventually be known as Koko. The "Clown" would challenge his creator, exhibiting a will of his own, and eventually break away from his existence on paper, crossing "the fourth wall" into reality, seeking some sort of pay back for being controlled by his creator, only to be returned to the inkwell before things got too far "out of hand."

"Out of the Inkwell" has not yet received enough votes to be rated. 2.2552
Add Your Vote Now!
Please give the Theatrical Series Out of the Inkwell a vote between 1 and five stars, with five stars being the best, 1 being a show you absolutely hate, and a three for an average show.
This Series has been viewed 4 times this month, and 9,260 times total.