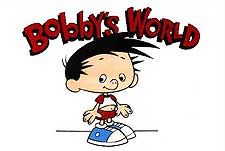 Fox's first Saturday morning cartoon was the brainchild of comedian Howie Mandel. Spiky-haired Bobby Generic (accent on the first syllable) was a four-year-old with a vivid imagination, escaping into his own "Bobby's World" when the real world was too weird to understand. Helping make it weirder were Bobby's eccentric family-big-haired dad Howie, calm mother Martha, obnoxious older brother Derek, and whiny sister Kelly. The only human in the family who seemed to understand Bobby was loudmouthed traveling salesman Uncle Ted. Bobby found more sympathy in the animal world, with his sheepdog Roger and stuffed spider Webbly joining Bobby's imaginative adventures.

"Bobby's World" has not yet received enough votes to be rated. 2.2552
Add Your Vote Now!
Please give the Cartoon Series Bobby's World a vote between 1 and five stars, with five stars being the best, 1 being a show you absolutely hate, and a three for an average show.
This Series has been viewed 3 times this month, and 2,954 times total.