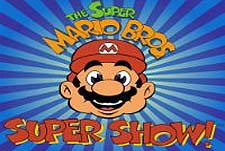 Based on a series of wildly popular arcade and home video games, The Super Mario Brothers Super Show consisted of three distinct segments. The first featured the exploits of Mario and Luigi, two brother plumbers who had been sucked down a drain and stranded in the Mushroom Kingdom. Once there, they were called on to rescue the lovely and benevolent Princess Toadstool. With the help of Toad, the Princess’ aide, the two plumbers worked determinedly to save the Princess from the evil dragon-like King Koopa.

The second part of the show was patterned after another game, The Legend of Zelda. Zelda was a young princess who, with the help of her adventursome friend Link, strove to outrace the evil wizard Ganon in a quest for the powerful "Triforce." Ganon, assisted by the magic of an evil talking mirror, thought he could rule the kingdom if he found the Triforce first.

The most entertaining aspects of the show were the live-action wraparounds that took place in "Club Mario." The segment was basically a spoof of kiddie shows, with characters like resident scientist Dr. Know It All and a one-man band named Band. Luigi and Mario themselves would often make appearances at the club. Mario was played by professional wrestling legend Captain Lou Albano, who also provided the voice for the animated version of the character.

The show proved to be a winner in syndication, and in 1990, the Mario Bros. became part of NBC's Captain N: The Game Master. As the show's success continued, Nintendo decided to take the next logical step: feature film. Super Mario Bros. debuted in theaters in 1993, coming up against the dino-juggernaut that was Jurassic Park. Faced with such tyrannosaurical opposition, the movie quickly faded away. Mario himself, however, enjoyed continued success in the video game world, remaining the shining star in the Nintendo firmament for years to come.

"The Super Mario Brothers Super Show" has not yet received enough votes to be rated. 2.2552
Add Your Vote Now!
Please give the Cartoon Series The Super Mario Brothers Super Show a vote between 1 and five stars, with five stars being the best, 1 being a show you absolutely hate, and a three for an average show.
This Series has been viewed 3 times this month, and 4,522 times total.