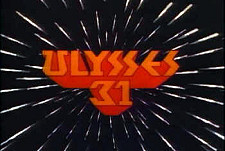 "Ulysses, Ulysses, soaring through all the galaxies,
In search of Earth, flying into the night..."

Greek epic met space epic in Ulysses 31, a French/Japanese animated retelling of Homer’s The Odyssey. Set in the 31st century, the cartoon replaced sailing craft with spaceships and memories with computer banks, but much remained the same.

Spacefaring hero Ulysses planned to return home to his wife Penelope after a lengthy stay at an orbiting space station above the planet Troy. The bearded Ulysses was under a strict deadline; if he didn’t make it back before the next comet passed the Earth, Penelope would be bound to marry another man. Unfortunately, the hero’s journey was interrupted when his young son Telemachus was kidnapped by the forces of the dreaded Cyclops.

Ulysses managed to kill the Cyclops and free his son, along with a group of other kidnapped children, but in doing so, he brought upon himself the wrath of the gods. On Poseidon’s urging, Zeus transported Ulysses’ ship, the Odyssey, to a far-off quarter of the cosmos. To make matters worse, the head god sent the crew into suspended animation and deleted the memory banks of the ship’s computer, Sherka, leaving Ulysses with little hope of finding his way back home. Only by finding the way to the Kingdom of Hades could Ulysses break the curse and return to his beloved wife.

Despite the frozen crew, Ulysses did have some companionship on his long journey. Telemachus had escaped the gods’ curse, as had Yumi, a blue-skinned, telepathic alien girl whom Ulysses had freed from the Cyclops. The trio was also joined No-No, a silly robotic buddy Ulysses had given Telemachus for his birthday.

Ulysses’ journey lasted 26 episodes, bringing him in contact with such familiar Greek legends as Circe, Theseus, King Minos, The Sphinx and dual dangers Scylla and Charybdis (re-imagined as planets of fire and ice). Thirteen of these episodes aired as part of the syndicated Kideo TV package in 1986 (the series itself dated back to 1981), but Ulysses 31 was replaced by episodes of Rainbow Brite before the remaining 13 could be aired. Resourceful fans managed to find the missing episodes elsewhere, allowing them to see the real end of Ulysses’ long and perilous journey.

4.7/5 Stars from 2 users.
Add Your Vote Now!
Please give the Cartoon Series Ulysses 31 a vote between 1 and five stars, with five stars being the best, 1 being a show you absolutely hate, and a three for an average show.
This Series has been viewed 3 times this month, and 8,911 times total.