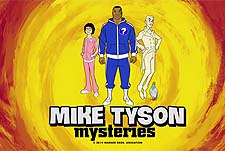 Mike Tyson stars as himself in this animated crime drama for Adult Swim. Aided by the Mike Tyson Mystery Team - the Ghost of the Marquess of Queensbury, Mike's adopted Korean daughter, and a pigeon who was once a man - Mike Tyson will answer any plea sent to him. If you have a problem that needs solving, Iron Mike is in your corner. The series incorporates live-action appearances featuring Mighty Mike himself, and the gloves come off as the former heavyweight champ and his team gear up for weekly adventures as they put unsolved mysteries down for the count.

4.5/5 Stars from 6 users.
Add Your Vote Now!
Please give the Cartoon Series Mike Tyson Mysteries a vote between 1 and five stars, with five stars being the best, 1 being a show you absolutely hate, and a three for an average show.
This Series has been viewed 3 times this month, and 7,439 times total.