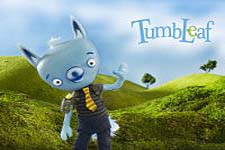 Created by animator Drew Hodges, Tumble Leaf features an anthropomorphic blue fox named Fig and his caterpillar friend Stick. The show was part of the first round of television pilots ordered by Amazon in 2013 for its Amazon Video service, and was officially picked up for its first 13-episode season on May 29, 2013.

"Tumble Leaf" has not yet received enough votes to be rated. 2.2552
Add Your Vote Now!
Please give the Cartoon Series Tumble Leaf a vote between 1 and five stars, with five stars being the best, 1 being a show you absolutely hate, and a three for an average show.
This Series has been viewed 3 times this month, and 999 times total.