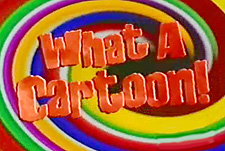 This was a project conceived by Hanna-Barbera president Fred Seibert and produced by Hanna-Barbera Cartoons. The series originally consisted of 48 short cartoons, and was intended to return to the classic cartoon production format and style by giving creative power to animators and artists. Each of 48 short cartoons mirrored the structure of a theatrical cartoon, with each film being based on an original storyboard drawn and written by its artist or creator. The What a Cartoon! Show was first known as World Premiere Toons and later called Cartoon Cartoon Fridays.
Read More
The What a Cartoon! creative staff came from all over: Europe and Canada (Bruno Bozzetto), Asia (Achiu So), the heartland of the US (Jerry Reynolds), and colleges (Seth MacFarlane). The crew also contained young series first timers (like Genndy Tartakovsky, Craig McCraken, Rob Renzetti, Butch Hartman, and John Dilworth), but veterans as well (like Don Jurwich, Jerry Eisenberg, and Ralph Bakshi). In addition to the veterans, Hanna-Barbera founders William Hanna and Joseph Barbera each produced two shorts each for What a Cartoon!. While John K. and Spümcø were considered for inclusion in this series, his two Ranger Smith shorts were produced and shown separately.

5/5 Stars from 2 users.
Add Your Vote Now!
Please give the Cartoon Series What A Cartoon! Show a vote between 1 and five stars, with five stars being the best, 1 being a show you absolutely hate, and a three for an average show.
This Series has been viewed 6 times this month, and 32,449 times total.