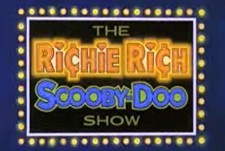 In 1980, Hanna-Barbera teamed up two durable characters for one hour-long program. Richie Rich was a Harvey Comics creation from the 1960's. "The Richest Kid in the World," with an allowance that was the envy of children everywhere, Richie went on globe-trotting adventures with faithful dog Dollar, buddy Freckles, girl pal Gloria, butler Cadbury, and robot maid Irona. Professor Keenbean, director of the Rich Science Center, created wacky inventions that would either help or hinder Richie's exploits.

Scooby-Doo was, of course, that sleuthing fraidy-dog who had been a Hanna-Barbera staple since 1969's Scooby-Doo In this incarnation, mystery often took a back seat to comedy, with Scooby, Scrappy, and Shaggy running the Fearless Detective Agency. Freddy, Velma, and Daphne were absent from the seven-minute segments, which were titled simply Scooby and Scrappy-Doo.

After two seasons, Richie joined The Pac-Man/Little Rascals/Richie Rich Show and Scooby segued into Scooby and Scrappy-Doo/The Puppy's New Adventures. Richie later turned up in reruns on CBS and in a 1994 live-action feature.


Hanna-Barbera
This page has been viewed 3 times this month, and 7,670 times total.