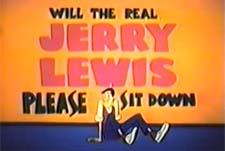 This half-hour Saturday morning cartoon series was based on characters created by zany comic Jerry Lewis for the films The Nutty Professor, The Bellboy, and The Errand Boy.

On the show, an animated Jerry worked as a temp for Mr. Blunderbuss of the Oddjob Employment Agency. Each week found the thoroughly incompetent temp sent to a new and nutty job, from spy to valet and more. Only one thing remained consistent: Jerry's penchant for comedic occupational blunders.

Joining the cartoon Jerry were kid sister Jerraldine, girlfriend Rhonda, and the comedian's own alter egos, from Professor Lewis to Ralph Rotten Lewis.

The real Jerry Lewis was a partner in the show's creation, but he chose not to perform the voice of his cartoon counterpart. That honor went to David L. Lander, the future 'Squiggy' on primetime's Laverne & Shirley.

3.5/5 Stars from 7 users.
Add Your Vote Now!
Please give the Cartoon Series Will The Real Jerry Lewis Please Sit Down a vote between 1 and five stars, with five stars being the best, 1 being a show you absolutely hate, and a three for an average show.
This Series has been viewed 4 times this month, and 5,210 times total.