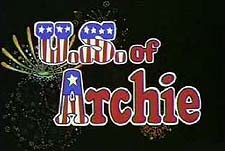 Archie and his friends had already enjoyed twenty-seven years of popularity in comic book form by the time they made it to Saturday morning television. The various Archies series (nine over the course of twenty years) mixed quick, Laugh-In inspired comic sketches with adventures and pop music.

The U.S. of Archie got a head start on celebrating America's Bicentennial by taking Archie and the gang out of Riverdale and placing them throughout history. This program was designed to teach children about our country’s heritage, and as a result, departed farther from the regular formula than any other incarnation.

Episodes featured the gang going back in time to learn about slavery while working on the underground railroad with Harriet Tubman, meeting George Washington Carver and finding out about his numerous inventions, and discovering how Betsy Ross came to sew the flag.

Fans, apparently, missed the pop music and the psychedelia, and The U.S. of Archie moved to the dead-end world of Sunday morning after a few months. The gang was revived and moved to NBC in 1977 to form half of The New Archie/Sabrina Hour.

2.5/5 Stars from 2 users.
Add Your Vote Now!
Please give the Cartoon Series U.S. of Archie a vote between 1 and five stars, with five stars being the best, 1 being a show you absolutely hate, and a three for an average show.
This Series has been viewed 3 times this month, and 3,890 times total.