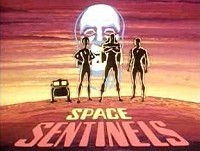 'Who better to save the earth than three teenage space travelers from another galaxy? A forerunner to Captain Planet, this otherworldly trio banded together every Saturday morning to help save humanity and protect the environment. Under direct orders from their alien leader, Sentinel One, each member was bequeathed with individual super powers to aid their fight against evil.

Hercules, as his name suggests, was the most muscular of the group. The lovely Astrea had the ability to transform herself into whatever object or life form she desired, while Mercury could move at the speed of light. Helping out occasionally was their robot friend, M.O., who was Sentinel One’s chief assistant.

Each week, the teenagers would wait in their spacecraft, which was housed inside a volcano, until they received orders from Sentinel One.

The show was politically correct even before such a term existed, with each of its stars hailing from a different ethnic background, both on-screen and off. Hercules was a blonde-haired, Nordic-like male, Astrea, an African-American woman, and Mercury, an Asian.

Originally The Young Sentinels, NBC changed the title to The Space Sentinels midway through the 1977-78 season. Unfortunately, the name change wasn’t enough to save the show from becoming a one-season wonder. The only character to survive the cancellation was Hercules, who showed up later that year in the Freedom Force segment of Filmation’s Tarzan and the Super 7.

"The Young Sentinels" has not yet received enough votes to be rated. 2.2552
Add Your Vote Now!
Please give the Cartoon Series The Young Sentinels a vote between 1 and five stars, with five stars being the best, 1 being a show you absolutely hate, and a three for an average show.
This Series has been viewed 3 times this month, and 4,094 times total.