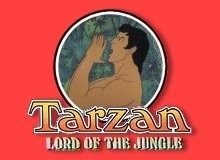 Edgar Rice Burrough’s bare-chested, loinclothed lord Tarzan has ruled the pop culture landscape since his first All-Story Magazine appearance back in 1912. Since then, the man-born/ape-raised hero has starred in literally hundreds of stories, movies, comic strips, radio and TV shows, but it wasn’t until 1976 that Tarzan finally got his own Saturday morning cartoon.

Filmation’s Tarzan, Lord of the Jungle left behind the "Me Tarzan, you Jane" character of the movie series for a more well-spoken jungle do-gooder. The hero still swung around on vines and communed with beasts, but his manner better reflected his noble English birth than his years being raised in the African jungle by an ape named Khala.

Make no mistake, however... this Tarzan was still a man of action. Together with little monkey sidekick N’Kima, Tarzan battled evil poachers, crocodiles, Spider People, jungle despots and more, calling in wild reinforcements with his familiar warbling yell. Filmation rotoscoped many of Tarzan’s actions, tracing the cartoon over live-action footage of a real actor, giving the ape man a chiseled figure and realistic movement. This he-man Tarzan look clearly caught on with young hero-worshippers, as Tarzan’s exploits formed a major part of the CBS Saturday morning lineup for several years.

After his first solo season, Tarzan joined a more modern hero for The Batman/Tarzan Adventure Hour, with new episodes of both Tarzan and Batman to keep young fans glued to their sofas. The following year, Tarzan got a whole slew of supporting players, enough to form the 90-minute Tarzan and the Super 7. Costumed cartoon superheroes like Isis, Microwoman and Superstretch, Web Woman and Manta and Moray appeared in separate segments, along with the live-action space series Jason of Star Command.

Tarzan took a sabbatical after the 1981-82 season, but CBS called him out of semi-retirement to finish out his Saturday morning career the same way he started it... swinging solo. Tarzan, Lord of the Jungle reappeared on CBS for a seven-month run in 1984, capping off the muscular vine-swinger’s illustrious cartoon series run. Though he no longer rules the Saturday morning airwaves, the big guy isn’t hurting for work, continuing to appear in feature films and wherever else a little jungle justice is needed.

4.5/5 Stars from 4 users.
Add Your Vote Now!
Please give the Cartoon Series Tarzan, Lord of the Jungle a vote between 1 and five stars, with five stars being the best, 1 being a show you absolutely hate, and a three for an average show.
This Series has been viewed 3 times this month, and 8,330 times total.