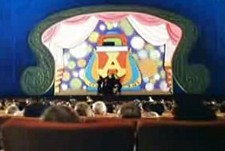 Archie and his friends had already enjoyed twenty-seven years of popularity in comic book form by the time they made it to Saturday morning television. The various Archies series (nine over the course of twenty years) mixed quick, Laugh-In inspired comic sketches with adventures and pop music.

Archie’s Funhouse announced the return to a half-hour format for the kids from Riverdale High, as Filmation spun Sabrina the Teenage Witch off into a series of her own. Funhouse took the emphasis off of the musical group The Archies (a real band fronted by studio musician Ron Dante, with the number one hit "Sugar, Sugar" to their credit), and although their music was still a major part of the program, the format changed to more of a variety-oriented show.

The animated show was added to footage of a live-action audience of children sitting in a theater "watching" Archie and the gang as they performed music and short comedic sketches, known as ‘blackouts.’ This is the series that featured ‘Archie’s Giant Jukebox,’ a popular attraction at Archie’s Funhouse. Many critics of Saturday morning television consider this to be the strongest of the Archie series, but after one year, it was time for yet another name change, this time to Everything's Archie.