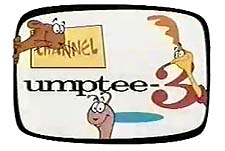 Channel Umptee-3 is a secret television station located in the white space between channels. It's transmitted by a small band of wildly enthusiastic television pirates who drive around in the Umptee-3 news van broadcasting stuff that's entirely too cool, too weird and too wonderful for regular television.

"Channel Umptee-3" has not yet received enough votes to be rated. 2.2552
Add Your Vote Now!
Please give the Cartoon Series Channel Umptee-3 a vote between 1 and five stars, with five stars being the best, 1 being a show you absolutely hate, and a three for an average show.
This Series has been viewed 3 times this month, and 2,648 times total.

On the Front Lines
More DVD's